Moving in the right direction

Little did Neville Burgess know when he and his wife bought Mobile Orange Storage as a ‘retirement project’, how wrong he would be on that count.

Three years later, and busier than ever, Neville soon realised that while the self-storage side of the business did provide some ‘passive’ income, what many more customers really wanted was help actually moving their precious possessions.

‘We started with one small Isuzu truck,” he recalls. “Now, we’ve got four trucks, in various sizes to provide the flexibility we need for the myriad of moving jobs we tackle.”

“And this being Dunedin, means there are plenty of steep driveways and narrow streets, so that wee truck still earns its keep.”

The first is accommodating customers. If Neville can help someone, he inevitably will. The second is having a flat, affordable, rate for customers that simply want help to move a big item like a fridge, or a couch they’ve bought from point A to point B, and the third is working for a growing range of commercial clients. These include Harvey Norman, Icon Logistics, Estate Property Solutions, Hunter Furniture, and several retirement homes.

As Neville explains: “Our growing corporate client base has been the answer to keeping our workflow consistent over the quieter winter months.”  So much so, that the Mobile Orange Moving & Storage team of six full-time staff, and office manager, Angela, are kept busy six days a week. 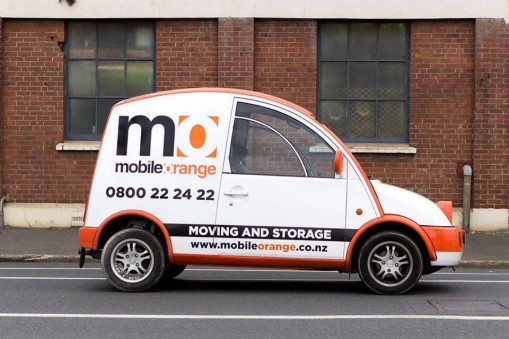 Word of mouth is still their best form of advertising, which is largely down to his team’s helpfulness and common sense: “We don’t just dump the item in the garage, or by the front door, and run. We always put the items in the right rooms for our customers.”

No wonder Mobile Orange have scores of ‘5-Star’ online reviews resulting in a lot of repeat business.

Neville’s relationship with PKF (or Keogh McCormack as they were back then) is also of long standing. It goes right back to the late 1990s when Neville was an independent contractor (first as a courier driver and later in waste management). Initially he used them to look over contracts and handle his end-of-year tax etc. But, increasingly, Neville and his wife seek input and advice from PKF Bredin McCormack Rewcastle about bigger decisions.

“Ken [Rewcastle] and Howard [Tilbury] are warm and approachable,” he says. “They don’t sugar-coat things. They’re straight talkers and I like that.”

“They’ve given me confidence to expand, try new things, and keep going in the right direction.”

That ‘direction’ in the literal sense, now includes regular runs down to Balclutha, over to Central, and up to Christchurch.

They key, according to Neville, is co-ordinating these as tightly as possible so that a full, or near full truck, is going both ways.  Organising such complex logistics is one of Neville’s strengths, and keeps him busy most of the day. Not that he’s afraid to pitch in and help his guys with the heavy lifting when required.

“There’s no way I’m going to knock off at five o’clock if my guys are still working,” he says. “That not who I am, or we are.  Everything is a team effort.”

A team which isn’t getting any smaller, anytime soon.