65 Years Of Conversations In A Barbershop 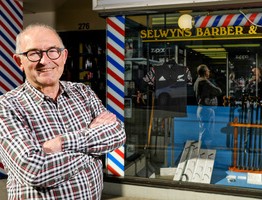 Not many people can say they have been in the same occupation for 65 years, but Dunedin hairdresser Selwyn Grave can.

“My brother was the one who suggested I give hairdressing ago” recalls Selwyn, referring to his brother Fred, who was older by 16 years.

Following what was then a four-and-a half-year apprenticeship, Selwyn scraped together the dollars needed at age 22 to set up his own barber shop at 8 Water Street (the Stock Exchange Building). That was in 1961 and he’s never even looked at doing anything else.

Over the years, the business has seen trends come and go, but overall it stayed true to its origins. Any changes have been relatively small for the most part – he moved premises three times but the last two premises have been on Moray Place. “I did my apprenticeship at number 32,” says Selwyn, “then moved to my first business in the Stock Exchange until they demolished the building four years later. I then moved to 241 Moray Place then to 276 which is where we are now.”

As the business grew steadily busier, Selwyn took on additional staff, for the haircutting and for the shop side of the business. “I have had a few bad employees over the years along with the good – the alcoholics were the worst” Selwyn recalls, shaking his head. “The good ones tended to stick around.”

Those of note included a Dutchman named John. “John worked with me for 30 years, and Lara in the shop has been with me now for 27 years” Selwyn continues. “I have a team of five still working for me.”

As time goes on, Selwyn has noticed less and less men going into hairdressing, “at least in Dunedin” he qualifies.

For a hairdresser there is plenty of competition out there vying for the same business, which in some industries can be an incentive to innovate and try new things. Selwyn Grave, however, did not diversify into women’s cuts like some other men’s barbers have done. He has stuck with solely men’s hairdressing.

The shop too has stayed much the same. It still offers the kinds of things you would expect to find in a traditional barber’s shop and tobacconists.

“We sell hair products, giftware and pipes and whatnot” Selwyn says with a shrug. “We don’t sell as many cigarettes as we used to – the same goes with the Zippo lighters. They were popular around 30 or 40 years ago, then they went out of fashion, then they came in again.”

Cutting hair is still the main revenue source for the business, “then fancy goods and then cigarettes.” Selwyn remembers when a pouch of tobacco sold for three and sixpence. “Now it costs $108  a packet.”

He hasn’t gone in for the new vaping market. “I don’t see it lasting, but then who knows with these things.”

Selwyn remembers when Eftpos was being rolled out in New Zealand. “I didn’t want anything to do with it as I didn’t think it would succeed” he recalls. The business had always taken cash or cheques up until then. Inevitably, there was little choice but to move with the times and take card payments along with the cash.

When Xero came along, it was the accountant who had the job of convincing Selwyn to adopt the new technology. “Peter McCormack persuaded me it was the right way to go, and he was right” says Selwyn. “We couldn’t do without it now.”

Electronic payments and cloud-based accounting would be the least of the changes Selwyn has seen in six decades of business.

“I’ve seen three global financial crises in my time. The worst was in ‘87, but that’s just because I lost some of my own money” he says, referring to the global crash that saw “Black Monday,” when the Dow Jones Industrial Average plunged 508 points, or 22.6 percent in value. It was its largest single-day percentage drop following a two-week period in which the Dow dropped 15 percent.

“None of this made much difference to the business though” admits Selwyn. “Hair still needed cutting and so people came in as they always did.”

At his peak, Selwyn would typically complete a cut in under 10 minutes, regardless what the style was.

“You see the usual changes of fashion with hair, and it doesn’t really matter – you just give the customers what they want. Sometimes you don’t like it, but you’re not the one wearing it.”

Selwyn can’t really name a favourite style he liked to cut. “I liked a bit of everything. It keeps the job interesting.”

When pressed for the worst haircut, Selwyn would only say that he couldn’t decide between Donald Trump or Boris Johnson as to which was worse.

Conversations in the barber shop over 65 years haven’t really deviated from the staple topics of racing and sport according to Selwyn. “I kept away from politics.”

Selwyn’s community involvement has included 40 years with Rotary, prior to that 15 with the Round Table. “You had to leave that organisation when you turned 40” explains Selwyn of the latter.

If you ask around, you would be hard-pressed to find a fellow in Dunedin who hasn’t had their hair cut at Selwyn Grave’s Hairdresser and Men’s Gifts at some point in their life.

“People don’t work as hard as they used to,” says Selwyn, who at 80 years old is proud to claim he hadn’t taken more than four days off in his entire working life until a stroke took him out of action last summer.

“I haven’t been in the shop at all this year,” he admits. Since then, his wife and business partner Lynette has been managing the business’ day to day.

After a year at home, Selwyn is mainly hoping to be allowed to drive again. “Physically, I know I’m there – I just have to convince them to give me my licence back.”

When asked if he had a succession plan, Selwyn’s instant retort was, “Why, do you know someone?” but it was clear he was not serious about retiring any time soon.

“One day someone will come along and buy the business, but not just yet. When the time comes, I’m pretty sure they (PKF) will have everything in order.”